Mozilla launched Firefox 17.0 with Integrated Facebook Messenger for free download. The new Firefox allows social API to integrate your browser with social networks, means you’ll be able to chat with your social networks whereas aquatics the World Wide Web. As a partnership between Mozilla and Facebook, the primary social feature for Firefox 17.0 is Integrated Facebook Messenger. For now all this is still the first step in the “socialization” of Firefox.


Now, just have a look at what Mozilla Firefox developers (Stuart Parmenter, Mike Beltzner, Johnathan Nightingale and Vladimir Vukicevic) say about the all new fast and advanced Firefox 17.0 and they proclaim how perfectly they’re gonna launch this awesome Firefox edition. 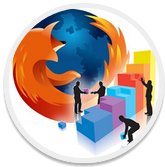 In the blog, the team says that, “the Mozilla Foundation is very excited about the new challenge and reports that need the help of testers to make it better, and then when everything is ready, release for all Firefox users”.

Step #1: The first program to use the Social API in Firefox is Integrated Facebook Messenger. To use it you need to install Firefox 17.0 and go to official Facebook Messenger page and click Turn On button. By doing this, a short message in the upper right corner informs that the feature was activated (see the image provided below for better understanding). 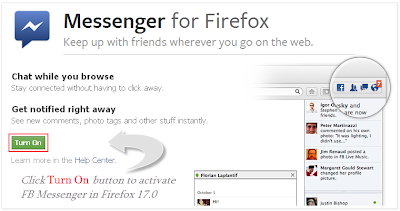 Step #2: After activating the feature and enter the login information from Facebook, four buttons (Profile, friend requests, messages and notifications as you see the zoomed area of the above image) are visible in the right corner of the toolbar in Firefox. In addition, Facebook contacts start to occupy the right side of the screen, requiring only click on one to start the conversation.


When you activate the social integration, the sidebar social news and chat are available while you browse the web, so no need to switch between tabs or open a new one. You can also share the page you are viewing with a single click in the address bar. The site can even notify you when new notifications arrive, all without leaving the page you’re visiting. But when you need to concentrate, you can also hide the toolbar.


Update: Firefox 17.0 as the Messenger for Firefox are still in the testing phase and because of this, unexpected errors may occur during use. But if you want to help the team at Mozilla Foundation and is not afraid to face a beta download for testing.