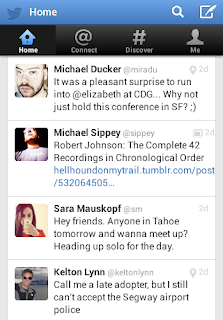 The Firefox OS is merely days old but app developers are already looking forward to begin developing apps for the fledgling ecosystem. Twitter has eagerly jumped on to the bandwagon as one of the first companies to announce its app for the fledgling platform.

Twitter has committed to having the Twitter for Firefox OS app available in the Firefox Marketplace when the first Firefox OS devices begin hitting the markets. "Similar to our other mobile apps, Twitter for Firefox OS has a rich interface, featuring the Home, Connect, Discover and Me tabs, as well as the search and compose Tweet icons, so you can easily find and send Tweets from anywhere in the app," wrote Manuel Deschamps, Staff Engineer at Twitter.

Twitter has announced a feature unique to the Firefox OS called Web Activities. Using it one can tweet photos directly out of any app that supports the feature. Twitter looks like it's optimistic about the future of the Firefox OS, as it is one of the first companies to start building an app for the platform in spite of it being unveiled only yesterday.

Mozilla unveiled Firefox OS and the first two smartphones that will run it on the first day of the Mobile World Congress. The company has tied up with chipset maker Qualcomm to use the Snapdragon SoCs in the Firefox phones. It also announced tie-ups with four manufacturers—ZTE, Alcatel, LG and Huawei, and the first two have already showcased phones running Firefox OS: the ZTE Open and the Alcatel One Touch Fire.

Firefox Marketplace apps will be powered by cloud services to enable easy transition across devices and platforms. It will have popular apps such as AccuWeather, Airbnb, Pulse News, SoundCloud, SporTV, Terra and Time Out, as well as tailored, local apps that are relevant to users in their respective regions. Web developers can also turn a website into an HTML5 app through Mozilla's development kit. Firefox OS supports video calling over Web RTC, a browser-based technology that's also available on the Android Firefox Aurora app.