Oh NO!! Google will shut down Google Reader on July 1 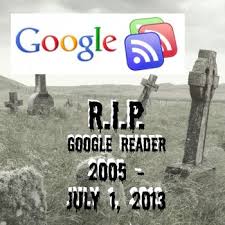 Google Reader, one of the world's most popular RSS readers, is shutting down on July 1, 2013, Google announced Wednesday.
The search giant is pulling the plug on the 7-year old project citing "declining usage." Google says it is shutting reader and deprecating or shutting down a number of other services as part of the company's "spring cleaning" initiative — one that seeks to help the company focus on the features that need the most use.
In addition to Google Reader, the company is also ceasing sales and updates for the Snapseed Desktop apps for Mac and Windows, shutting down its CalDAV API, as well as ending support for Google Voice for BlackBerry.
Still, the biggest and most forcible change is the death of Google Reader. Google will allow users to export their data — including subscriptions — using Google's Takeout service, as well as the OPML export within Google Reader itself.

A Blow to News Junkies

Use of traditional RSS readers have slowed in recent years, thanks in part to Twitter and apps such as Flipboard. But Google Reader — and RSS in general — is still tremendously useful for individuals that follow lots of sites and web feeds.
Back in 2011, Google revamped the Google Reader service to integrate with Google+. At the same time, the company removed a number of long-standing features, including the ability to share Reader items with other users.
More than 10,000 users signed a petition to get Google to reinstate changes to no avail.
For the last 18 months, most prominent RSS software authors and experts have cautioned users and developers from relying too much on the Google Reader system, in part because it became clear the product was no longer core to Google as a company.

The Impact to Third Party Apps

Beyond just the Google Reader web client and official apps, the death of Google Reader spells big problems for the dozens of third-party apps that rely on Google Reader for subscription and sync information.
This includes apps such as FeedDemon, NetNewsWire, Reeder, Pulp and others. Just last month, Brent Simmons, the author of the seminal RSS app NetNewsWire and a former employee of RSS company NewsGator wrote a post detailing the coming "RSS Sync apocalypse"
For those app developers, the challenge will now be to move to a system an infrastructure that can replicate Google Reader, to shut-down or to support Reader alternatives.
Let us know what you think about the death of Reader in the comments.

[via Marshable]
Posted by Harikesh at 1:44 PM